The world’s first adhesive postage stamp, the Penny Black, was launched in Britain in May 1840. It depicted a dignified profile picture of Queen Victoria and received its name because of its colour and its face value of one penny.

Issued on 1st May, the stamp didn’t become valid for use until 6th May. Queen Victoria was celebrating her 21st birthday on 24th May and the picture on the stamp was an elegant image, suggesting a maturity to the young queen. 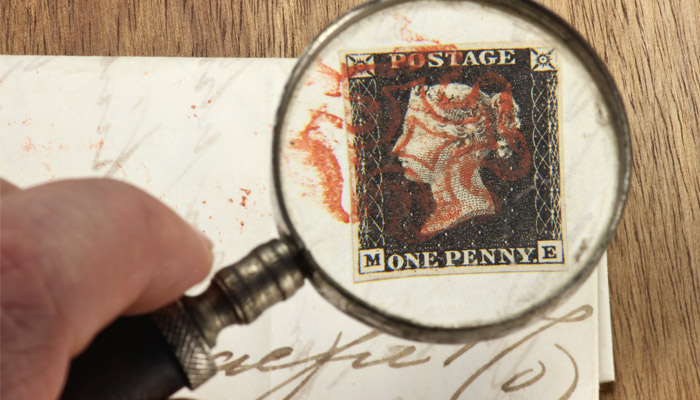 In fact, Queen Victoria was only 15 years old in the image used on the Penny Black. The picture was based on a sketch of the queen drawn by London-based artist Henry Corbould in 1837, but the image had originally been created by William Wyon, the Royal Mint’s chief engraver, as far back as 1834.

The image of the queen that adorned millions of stamps in 1840 had actually been captured six years earlier, before she even became the monarch. Wyon’s engraving of her profile was originally used on the famous City Medal, released by the Royal Mint in 1837, to commemorate Victoria’s first visit to London after her accession to the throne.

To create the profile image for the Penny Black, Corbould had drawn a sketch from the engraving on the medal in 1837. When his drawing appeared on the stamp, it seemed it was the queen at the age of 21, but this wasn’t the case at all.

The invention of postage stamps in the 19th century was important for Britain’s postal service. Prior to their introduction, the recipient rather than the sender paid the postage fee. It was usually only the upper classes who could afford to send mail, due to the high costs – letters went undelivered if the recipient couldn’t afford to pay.

Postal reforms were instigated in January 1837, when teacher and social reformer Rowland Hill, of Kidderminster, put forward his proposals to Parliament in a report called Post Office Reform – Its Importance and Practicability.

His system was adopted in 1839 and the Penny Black was the first stamp released under the new regulations. It immediately had an effect on the postal service, as the volume of mail in the UK increased by 120%. The Penny Black was released to the London post offices first, gradually filtering through to the rest of Britain.

More than 68 million Penny Black stamps were printed, spread over 286,700 sheets, between May 1840 and February 1841. Many people saved them, as they were considered a milestone in Britain’s history. They remain available to stamp collectors today in their used condition and often pop up on auction sites, such as eBay.

The British Postal Museum owns the only complete sheets of Penny Blacks that have never been used. Prices of used Penny Black stamps vary greatly – a basic used stamp can fetch around £300 at auction, however, there are a few rarer examples in existence, such as those which contain minor errors, and these can fetch as much as £300,000!

The Royal Mint took precautions to protect against forgery. The Penny Black featured letters in the corner of each stamp, in 240 different combinations, ranging from AA to TL. Collectors today sometimes try to find runs of stamps with the consecutive letters printed in the corners, although this can prove incredibly difficult.

In February 1841, the Penny Red was launched, signalling the end of its predecessor. It was printed for almost four decades, through to 1880. Around 13.4 billion Penny Reds were issued, so it’s much less rare today than the Penny Black.

The Penny Black is considered to be a British cultural icon, as its design features in the “innovations” section of the new British passport, released in 2015.